Back to the texts index → 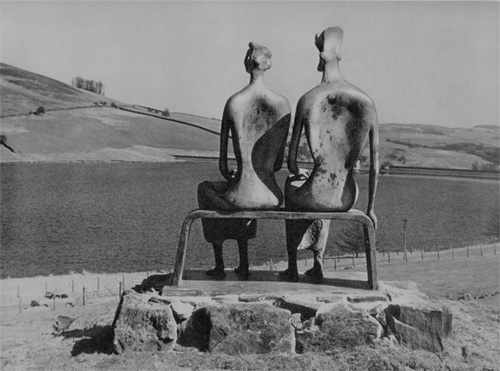 When for the first time, on the frontispiece of a small catalogue by Kurt Valentin, I saw the picture of the fascinating characters which are the “King and Queen”, I immediately thought of their potential – because of the way the artist had created them – to become the source and the protagonists of a myth.
An adventure that would be nothing new for sculpture, but certainly rare and eventful, especially in modern times. Now the King and Queen have found their ideal location thanks to one of those arcane but inexorable laws that rule the destiny of works of art. One could not have found a better location for their hieratic immobility, a location which is dominated, almost galvanized, by their silent presence. All thanks to the intelligence and great sensitivity of a Scottish art collector who has chosen the land of Dumfries as “their” private garden.

Such a landscape is simply perfect for Moore’s sculptures because of the lines of its horizon, which follow the gentle slope of a hill or a sinuous rise. The soft, extended contours of a valley can also be seen in Moore’s works, with that same rhythm and grandeur – just look at some of his reclining figures, for example.
One has to admit that having placed these two figures on a small bare and rocky area next to the downward slope of a meadow, alone in a sea of grass and with the sky as background, represents an act of courage and of faith in the power of sculpture. These two figures could also have been defeated by the enormous body of nature, which in this case is no mere park or artfully designed garden. Such a brave decision shows a full understanding, leading to certainty regarding their potential. These two figures have an unfathomable but clear feeling of solitude within themselves, and share it with the host landscape. They have an arcane detachment from the world: hieratic and in solitude, immobile and thoughtful, they seem to be consciously observant of the passing of time, the slow changing of seasons, and the faraway movement of eternal things that are neither human nor of this world. I previously mentioned the idea that these two figures could be linked to a myth. To my mind this was so obvious that I could already see the King and Queen as characters of fables or legends told by the inhabitants of the local villages, legends that would take on justification over time. Certainly one day that meadow, pasture or estate will be known as the “King’s…” and the “Queen’s…”, and in time the two magical figures will either change the name of these places or grant them one should they be nameless, making them take on an unmistakable character. One could say that they will go back to where they were born, to the place from whence they came, by a path unusual for most modern sculpture: to a kingdom, a world of myths, fables and legends. As Moore said, the origins of this couple are linked to the fact that for many years he used to tell fables himself, stories about Kings and Queens, to his daughter. When a work of art contains poetry, then its life and destiny unfold along unknown paths, as if in a saga. And in referring in such a vivid and fascinating way to the archaic idea of “kings”, these statues/characters find their main justification in their immobility, their being without “gestures” or without “actions”, in a fatal parallelism, together with their distant gaze and their strange absorption in their own vision. 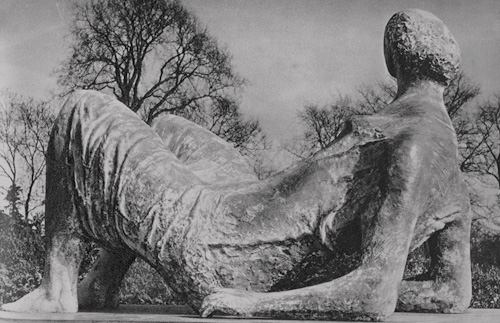 A certain metaphysical (but not surrealistic) sense hovers over the King and Queen as and where they are now. Their fulcrum is found in the head of the King himself, a head that is head and crown at the same time, his face and beard combining in the same form. In spite of the faun-like appearance that reminds us of the god Pan, present in the King’s expressive head, the primary characteristic of ancient regal presence has not been diminished. On the contrary, such features add a more suitable appearance to the environment where the statue stands and lives, giving the crown a rustic look, as on the head of a landlord.
I would therefore like to focus more on the character of these two sculptures, but also to describe their form, the way they are – despite some of their contradictions – stylistically linked in all their parts. I would like to understand their form in their full spatial existence. However, for now I want to remind the reader (as far as King and Queen, Draped Figure, some small bronzes and Large Warrior with Shield are concerned), of the fact that Moore favours the more figurative aspects in his most recent art, where the research and reinvention of certain human forms are the most interesting and innovative aspect. Even if Moore is almost never totally detached from an anthropomorphic shape, in his most recent sculptures we can perceive his stronger fascination for the human body. These are the works that prove – because of their value as sculptures – that the most authentic meaning of “sculpture” is that of the “human form” from which the sculptor never manages to totally separate himself, and consequently always refers to in his work. Even though he is fascinated by forms unknown to him and has copied them, in his research this mostly proves to be neither essential, nor definite nor universal despite its validity and fascination.

I have talked about Moore’s attraction to certain forms, certain elements of human forms, and his attempt to recreate them within new aspects and new dimensions.
I have also discussed the King’s head. However, I can also talk about the two figures in terms of their long thin arms, their flat hands, their concave laps and their broad, smooth shoulders. In Moore’s Draped Reclining Figure, where one can sense the presence of the majestic and infinite Parcae, the above-mentioned research is less evident. However, on the whole, this work of art remains, to my mind, one of Moore’s most representative sculptures because of its large and spacious construction, for the immobility which governs such a closed and blocked figure, for the rhythm of its lines, for the unusual way in which Moore designed the drape and for the kind of meditative and engrossed look which gives this figure a rather unique charm that renders it not simply a statue but something more mysterious, unexplainable as if it were not just a reclining woman seen from an archaic and primordial viewpoint, but a statue of a divinity. Is she a divinity of the Earth? This too is a reference to a certain mythology, to which Moore would like to draw our attention. 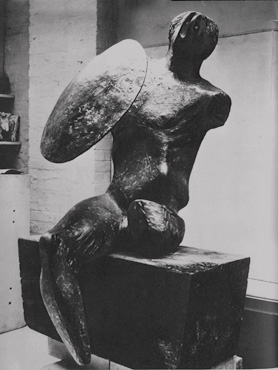 Where did that Large Warrior come from? Through which ancient memories, down which paths, from which battles has he managed to reach us, maimed but still so powerful? Closed and strong ganglion of embodied strength, tight fist, surviving gladiator of tragic games, mythic hero: what has he come to say to the present world?
Is it a warning, a premonition? These are all questions that can be answered only over time, despite the instinctive, unconscious and unquestionable aspects present in the work of a real artist. For the moment, it is important that Moore has husbanded his forces and created with artistic meaning what he had within himself. And in this great “plastic invention” Moore has created what, in his view, has to be done by the sculptor: “He must strive continually to think of, and use, form in its full spatial completeness. He gets the solid shape, as it were, inside his head – he thinks of it, whatever its size, as if he were holding it completely enclosed in the hollow of his hand. He mentally visualises a complex form from all round itself; he knows while he looks at one side what the other side is like. He identifies himself with its centre of gravity, its mass, its weight and realises its volume, as the space that the shape displaces in the air.”
It is only in this way that those maimed arms and legs will not be perceived as stumps, but as essential and precise forms, and that the lifted shield, in mid-air, will not be an empty circle or a meaningless part, but a functional and precise integration of a whole. The whole sculpture will not be seen as a fragment but as something alive, complete and immutable. To whom does it belong? Does it belong to us? Or rather to the beginning of a new civilization? There is a lot of faith in men, in their honest, conscious strength, in this Large Warrior with Shield, making me think that Moore intentionally wanted to reiterate the importance of man in the world, even if it is a new world of scoriae and lava, of which we can only glimpse the beginning. Once again we can see art forerunning time, and we hope that this capability will act as a warning to us.

Maybe there are still too few of us in the present world who can see art in this way, whether it is modern or ancient.

Manage Cookie Consent
To offer you an ever better browsing experience, this website uses its own cookies and those of selected third-party partners. Third-party cookies may also be profiling cookies. Please read our information on the use of cookies to find out more or go to "Customise" to manage your settings. By clicking "Accept" you consent to the storage of cookies on your device. By clicking "Reject", you accept the storage of only necessary cookies.
Manage options Manage third parties Manage vendors Read more about these purposes
Customize
{title} {title} {title}